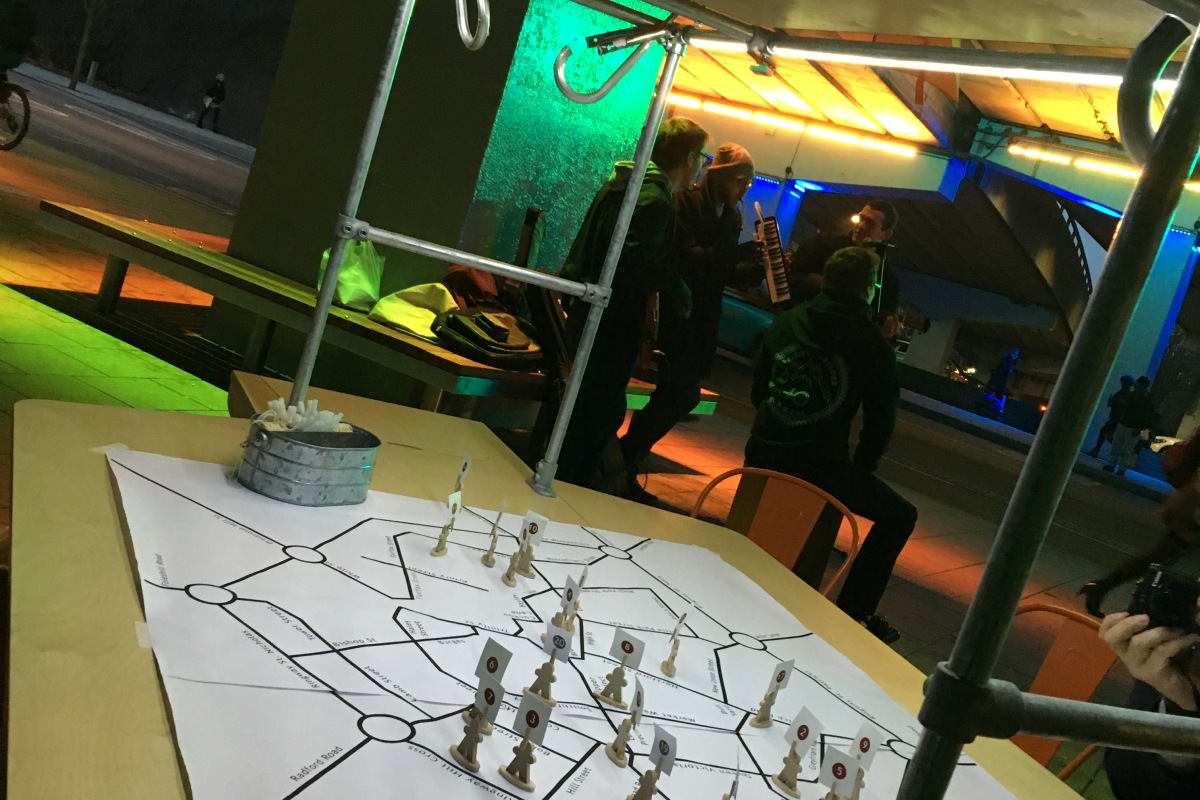 The Cart’s outing under the Ring Road proved that it’s possible to, with judicious application of free refreshments, come up with a flippin brilliant programme of events in just a few hours. Who knows whether any of these will make it into the city’s bid for UK City of Culture 2021, but if they don’t, we should make them happen anyway…somehow!

Where: CCC car park under the Gosford Street/Ring Road Flyover

What: A festival of outdoor film screenings of world cinema, curated to include films where a city plays an iconic role, and to include films made in cities/countries where Coventry residents hail from. Served alongside are foods from the appropriate country for each event.

What: One carriageway of the ring road (ie one direction) is closed to traffic and transformed (temporarily or permanently??) into a long, thin city park – and enveloping green lung. Similarly to New York’s High Line, it allows residents to walk, sit, picnic above the city at the level of the treetops. It should include a cycleway and bridleway (recreate Godiva’s horseride?!) and, in a development of Coventry University’s Edible Campus, edible plants that park-users are free to pick. For 2021 this might be a temporary transformation and so might include the creation of a ‘park on wheels’ that colonises the ring road for this event but can be moved elsewhere. If it is permanent, it should also include ‘outdoor gym’ equipment.

Where: Coventry Cathedral if one event, or multiple venues if festival.

What: An event or festival of electronic music written/played by women. Includes a performance of the Dr Who theme tune played live (by women!) and using as near as possible to original equipment. Includes workshops in electronic music creation with children in schools and particularly young women – including at Barrs Hill, the former Girls’ Grammar School – since this was where Delia Derbyshire went to school. Could also include electronic arrangements of Two-Tone classics to involve Pauline Black and other important female musicians from Coventry. (This idea was partly inspired by the story of a young woman who had been put off studying electronic music composition in Coventry by the male-dominated attitude she encountered at the open day).

What: UrbEx meets Severn Trent: A new song cycle, composed for the Severn Trent Choir is performed in the culverted River Sherbourne. The choir are dressed in concert gear and waders, and filmed performing the song. The film of their performance is inter-cut with footage of an urban explorer’s point-of-view of the walk through the culvert from Spon End to Gosford Street, showing the beauty of the hidden pipework and ancient bridge arches, and the song charts the ebbs and flows of the river. The resulting film (of walk and performance) is projected onto a screen suspended over the swimming pool and is viewed from the spectators gallery.

What: Not just a comic convention! This event is built around the launch of a new made-in-Coventry comicbook/graphic novel. The book features locally-based or from-Coventry comic artists and writers – making comic book stories set in Coventry and featuring recognisable architecture/locations. Perhaps it is a compilation of short stories all set in Coventry. Perhaps some of the writers are city poets and their stories can also be performed at a spoken word event with projections of the images – live comic book performances.

Where: Across the city

What: Coventry residents sign up to a (daily? weekly?) challenge to perform random acts of kindness in an effort to see whether this really makes Coventry a nicer place to be. Could this be associated with a research project to really measure/evaluate this? The acts of kindness could be pooled? Or people are sent an action to do each week? (Realise that makes it less random!) Particular attention to be paid to the city’s homeless (identified as people in need of kindness) but also interesting if the homeless/homeless charities are involved in perpetrating the kindnesses too.

Where: across the city

What: A dance off with a difference. Residents are invited to film themselves dancing in their favourite place and to their favourite tune, then to upload their video to a bespoke site. Perhaps these videos are given to a film artist/choreographer partnership to be cut together to make one new whole Coventry dance. This dance is performed (by professionals?) at a durational event? Or pops up across the city? The film could be used by VJs at live dance off events?

What: Event celebrating all forms of wheeled skating (roller skates, rollerblades, skateboarding), and highlighting the prowess of some of our local skaters of all ages. A temporary skate park is set up for demonstrations and have-a-go tutoring. This could be a bespoke skate park and could include representations of various bits of the local urban realm. It has sections for beginners, intermediate and pro’s. Accompanied by an exhibition on the history of urban skateboarding at the Transport Museum and an event that brings town planners, architects, policy makers and skaters together to explore issues and imagine what a skate-friendly city might mean/what benefits it might bring.

What: A Festival of Britain style expo of products made in Coventry. Echoing an expo which was held in Memorial Park in 1951 alongside the Festival of Britain. Includes work by Coventry University product design students and so on. Intended for Coventry people to get an insight into the creative processes and products coming out of the city (inc Olympic Torch etc).